Date 28.01.2021
Text Rémi Carlier
Source EPFL
Photo Johan Gaune, EPFL's Snow and Avalanche Simulation Laboratory Director © Jamani Caillet/EPFL
School of Architecture, Civil and Environmental Engineering
Snow and Avalanche Simulation Laboratory
Researchers from EPFL and ETH Zurich have conducted an original scientific study that puts forth a plausible explanation for the mysterious 1959 death of nine hikers in the Ural Mountains in the former Soviet Union. The tragic Dyatlov Pass Incident, as it came to be called, has spawned a number of theories, from murderous Yeti to secret military experiments.

n early October 2019, when an unknown caller rang EPFL professor Johan Gaume’s cell phone, he could hardly have imagined that he was about to confront one of the greatest mysteries in Soviet history. At the other end of the line, a journalist from New York asked for his expert insight into a tragedy that had occurred 60 years earlier in Russia’s northern Ural Mountains – one that has since come to be known as the Dyatlov Pass Incident. Gaume, head of EPFL’s Snow and Avalanche Simulation Laboratory (SLAB) and visiting fellow at the WSL Institute for Snow and Avalanche Research SLF, had never heard of the case, which the Russian Public Prosecutor’s Office had recently resurrected from Soviet-era archives. “I asked the journalist to call me back the following day so that I could gather more information. What I learned intrigued me.”

A sporting challenge that ended in tragedy

On 27 January 1959, a ten-member group consisting mostly of students from the Ural Polytechnic Institute, led by 23-year-old Igor Dyatlov – all seasoned cross-country and downhill skiers – set off on a 14-day expedition to the Gora Otorten mountain, in the northern part of the Soviet Sverdlovsk Oblast. At that time of the year, a route of this kind was classified Category III – the riskiest category – with temperatures falling as low as –30°C. On January 28, one member of the expedition, Yuri Yudin, decided to turn back. He never saw his classmates again. 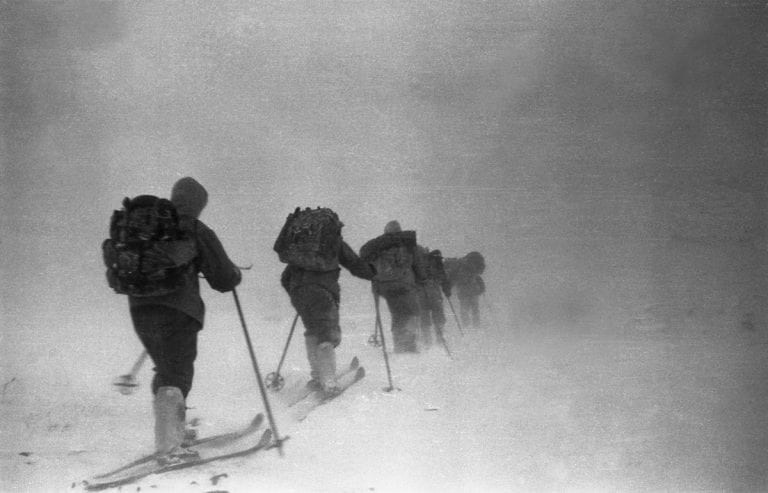 Dyatlov’s group on February 1st on their way to Kholat Syakhl. © Courtesy of the Dyatlov Memorial Foundation

When the group’s expected return date to the departure point, the village of Vizhay, came and went, a rescue team set out to search for them. On 26 February, they found the group’s tent, badly damaged, on the slopes of Kholat Syakhl – translated as “Death Mountain” – some 20 km south of the group’s destination. The group’s belongings had been left behind. Further down the mountain, beneath an old Siberian cedar tree, they found two bodies clad only in socks and underwear. Three other bodies, including that of Dyatlov, were subsequently found between the tree and the tent site; presumably, they had succumbed to hypothermia while attempting to return to the camp. Two months later, the remaining four bodies were discovered in a ravine beneath a thick layer of snow. Several of the deceased had serious injuries, such as fractures to the chest and skull.

The Soviet authorities investigated to determine the causes of this strange drama, but closed it after three months, concluding that a “compelling natural force” had caused the death of the hikers. In the absence of survivors, the sequence of events on the night of 1 to 2 February is unclear to this day, and has led to countless more or less fanciful theories, from murderous Yeti to secret military experiments. 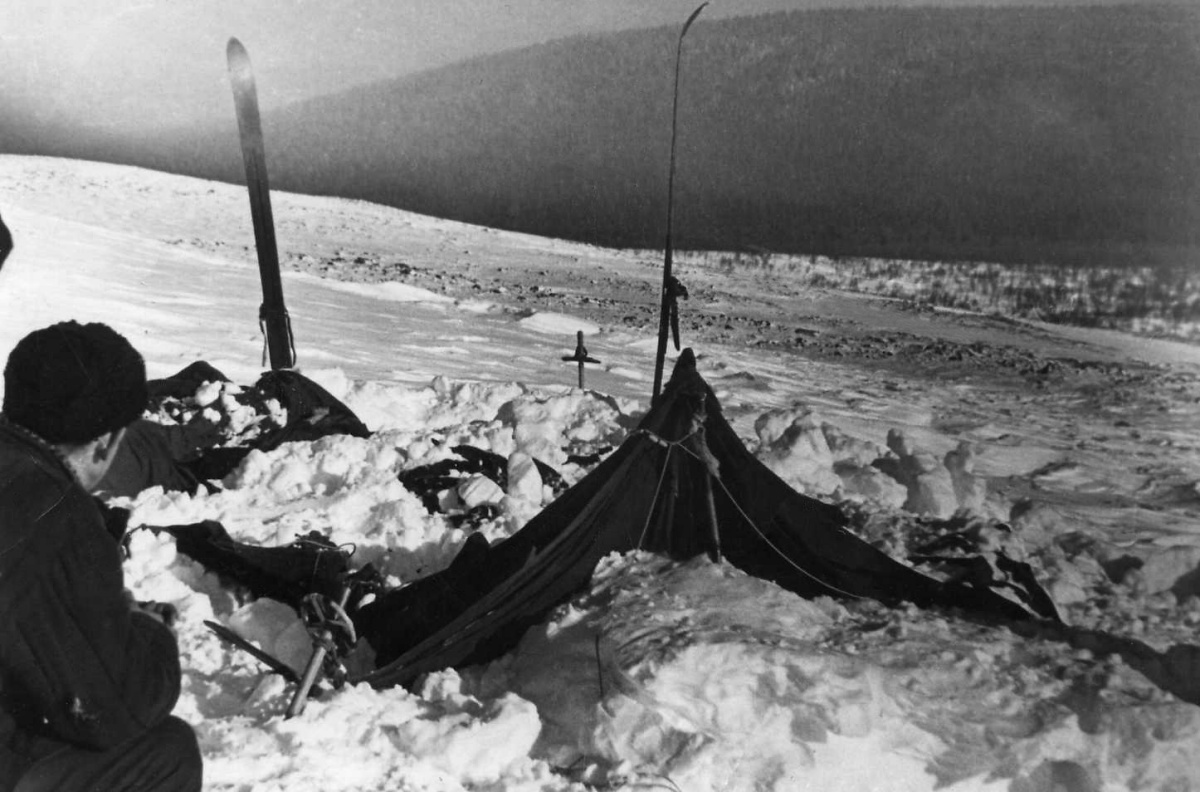 The tent as it was discovered by the rescue group, on 26 Feb 1959. © Courtesy of the Dyatlov Memorial Foundation

his is the mystery that Gaume was confronted with. “After the call from the American reporter, I began writing equations and figures on my blackboard, trying to understand what might have happened in purely mechanical terms,” he says. “When the reporter rang back, I told her it was likely that an avalanche had taken the group by surprise as they lay sleeping in the tent.” This theory, which is the most plausible, was also put forward by the Russian Public Prosecutor’s Office after the investigation was reopened in 2019 at the request of the victims’ relatives. But the lack of evidence and the existence of odd elements has failed to convince a large portion of Russian society. “I was so intrigued that I began researching this theory more deeply. I then contacted Professor Alexander Puzrin, chair of Geotechnical Engineering at ETH Zurich, whom I had met a month earlier at a conference in France.”

Gaume, originally from France, and Russian-born Puzrin worked together to comb through the archives, which had been opened to the public after the fall of the Soviet Union. They also spoke with other scientists and experts in the incident, and developed analytical and numerical models to reconstruct the avalanche that may have caught the nine victims unaware.

The Dyatlov Pass mystery has become part of Russia’s national folklore. When I told my wife that I was going to work on it, she looked at me with deep respect!

“The Dyatlov Pass mystery has become part of Russia’s national folklore. When I told my wife that I was going to work on it, she looked at me with deep respect!” says Puzrin. “I was quite keen to do it, especially because I had started working on slab avalanches two years earlier. My primary research is in the field of landslides; I study what happens when a certain amount of time elapses between when a landslide is triggered and when it actually occurs.” According to Gaume and Puzrin, this is what happened in 1959: the hikers had made a cut in the mountain’s snow-covered slope to set up their tent, but the avalanche didn’t occur until several hours later. 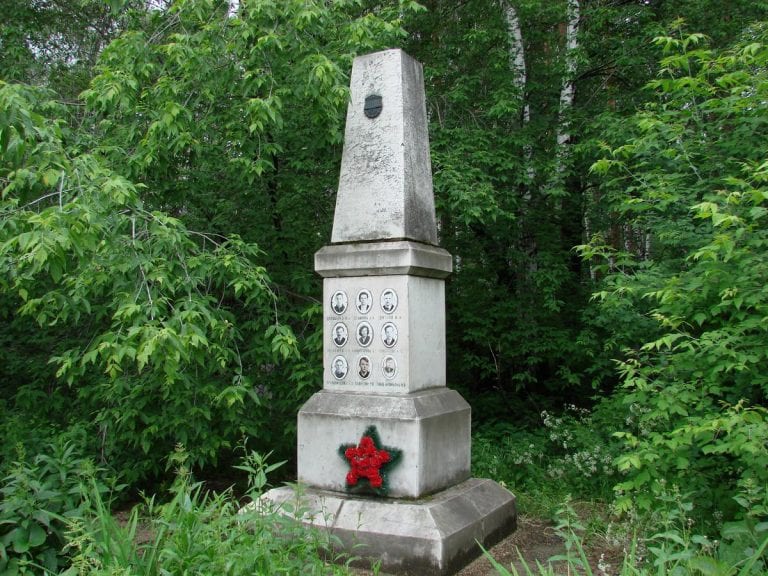 One of the main reasons why the avalanche theory is still not fully accepted is that the authorities have not provided an explanation of how it happened. 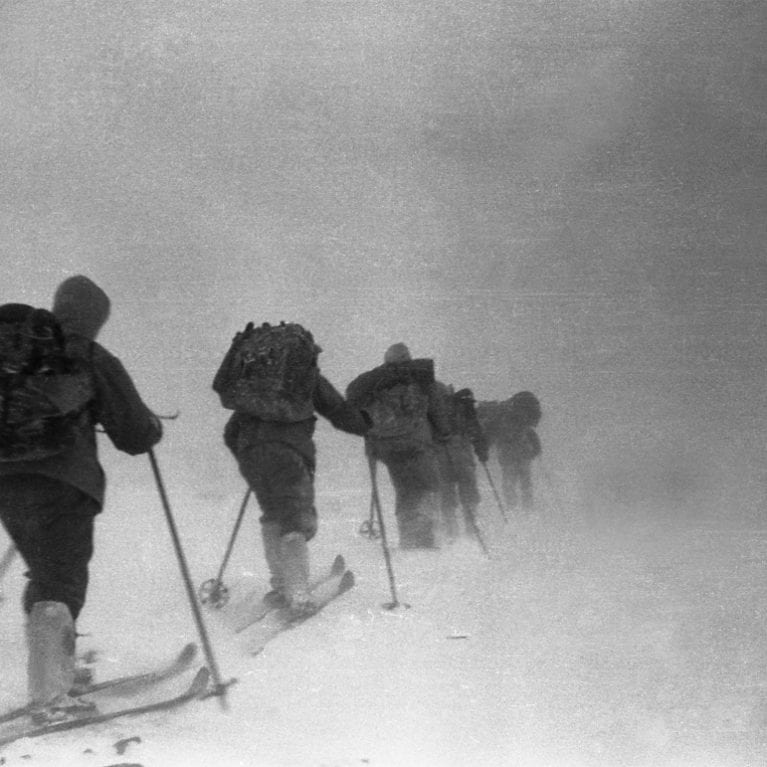 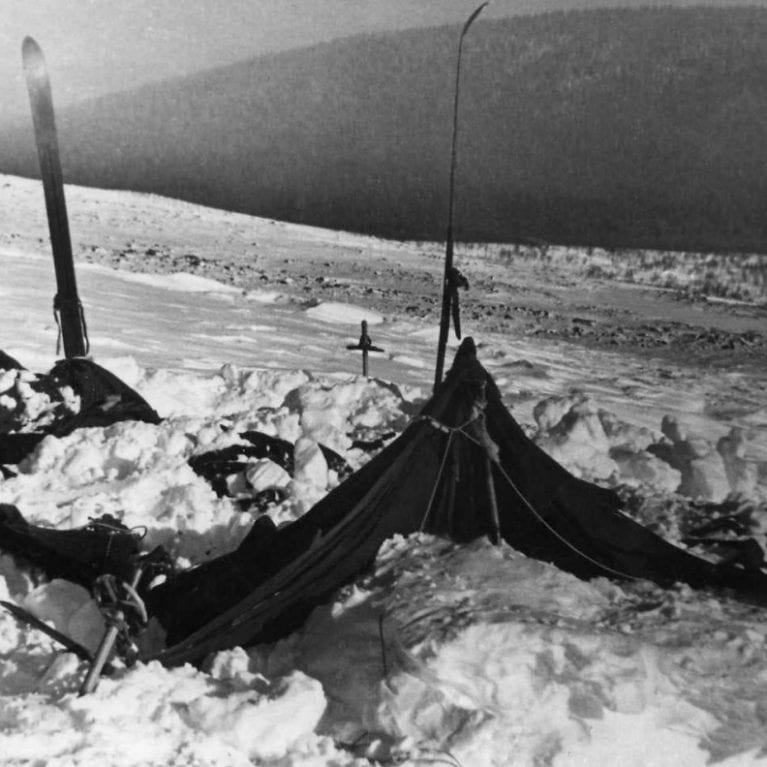 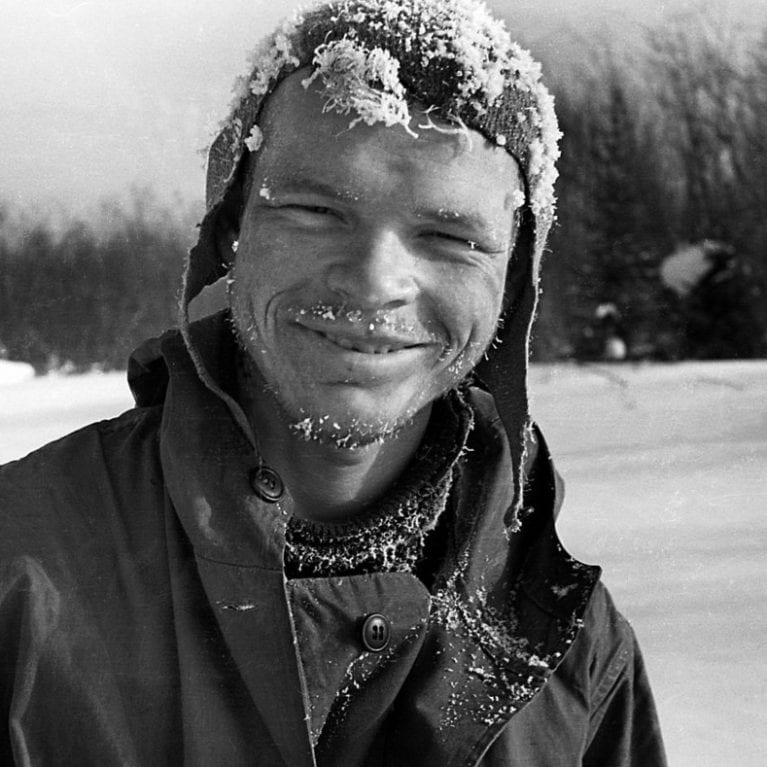 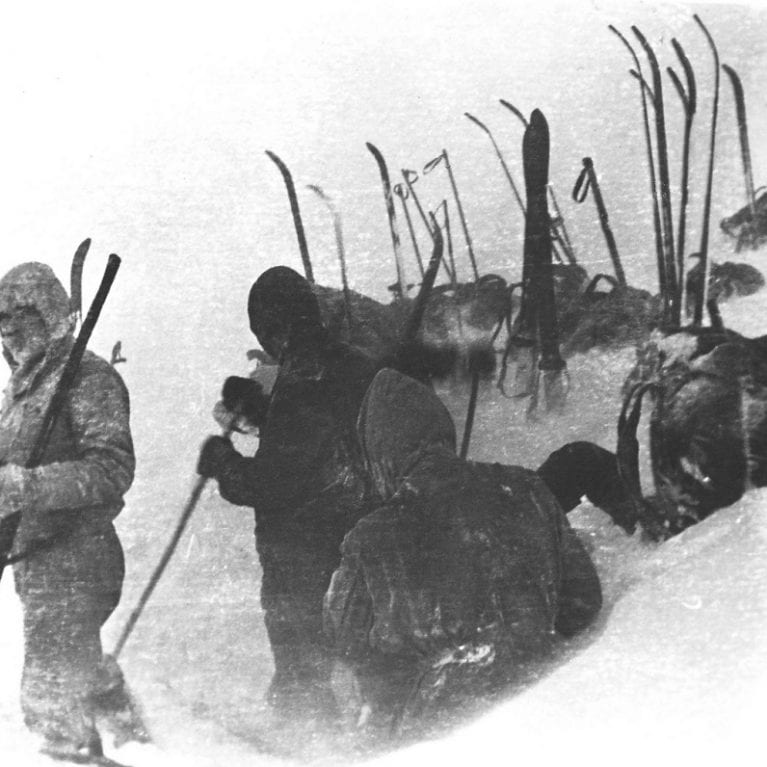 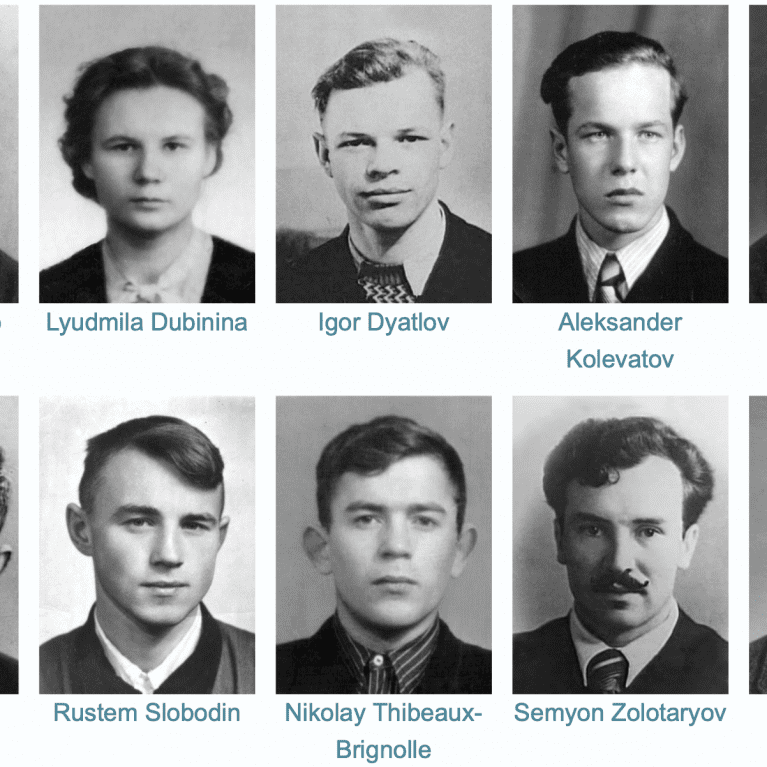 Bridging the gaps in the investigation

“One of the main reasons why the avalanche theory is still not fully accepted is that the authorities have not provided an explanation of how it happened,” says Gaume. In fact, there are a number of points that contradict that theory: first, the rescue team did not find any obvious evidence of an avalanche or debris. Then the average angle of the slope above the tent site – less than 30° – was not steep enough for an avalanche. Also, if an avalanche occurred, it was triggered at least nine hours after the cut was made in the slope. And finally, the chest and skull injuries observed on some victims were not typical of avalanche victims. 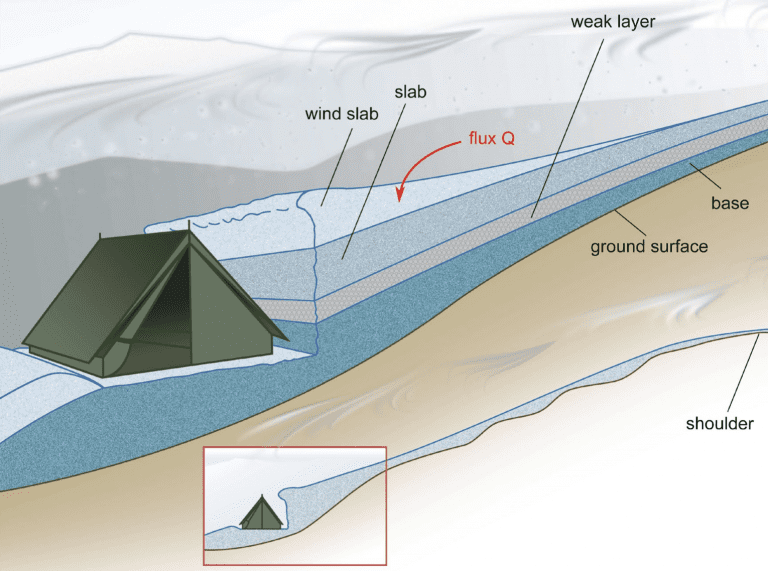 Configuration of the Dyatlov group’s tent installed on a flat surface after making a cut in the slope below a small shoulder. Snow deposition above the tent is due to wind transport of snow. © Gaume/Puzrin

In their investigation, published in Communications Earth & Environment – a new journal by Nature Research – onJanuary 28, Gaume and Puzrin attempt to address these points. “We use data on snow friction and local topography to prove that a small slab avalanche could occur on a gentle slope, leaving few traces behind. With the help of computer simulations, we show that the impact of a snow slab can lead to injuries similar to those observed. And then, of course, there’s the time lag between the team cutting into the slope and the triggering of the event. That’s the main focus of our article. Previous investigators have been unable to explain how, in the absence of any snowfall that evening, an avalanche could have been triggered in the middle of the night. We had to come up with a new theory to explain it,” says Gaume. 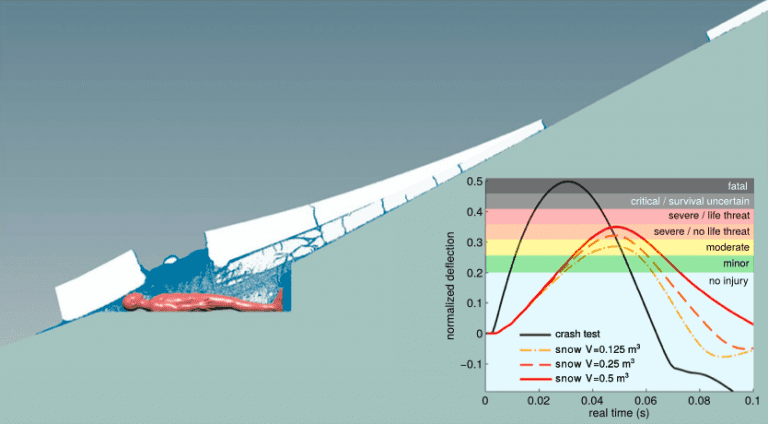 Simulation of the dynamics of a snow-slab avalanche and its impact on a human body. © Gaume/Puzrin

On the night of the tragedy, one of the most important contributing factors was the presence of katabatic winds – i.e., winds that carry air down a slope under the force of gravity. These winds could have transported the snow, which would have then accumulated uphill from the tent due to a specific feature of the terrain that the team members were unaware of. “If they hadn’t made a cut in the slope, nothing would have happened. That was the initial trigger, but that alone wouldn’t have been enough. The katabatic wind probably drifted the snow and allowed an extra load to build up slowly. At a certain point, a crack could have formed and spread, causing the snow slab to release,” says Puzrin.

If they hadn’t made a cut in the slope, nothing would have happened. 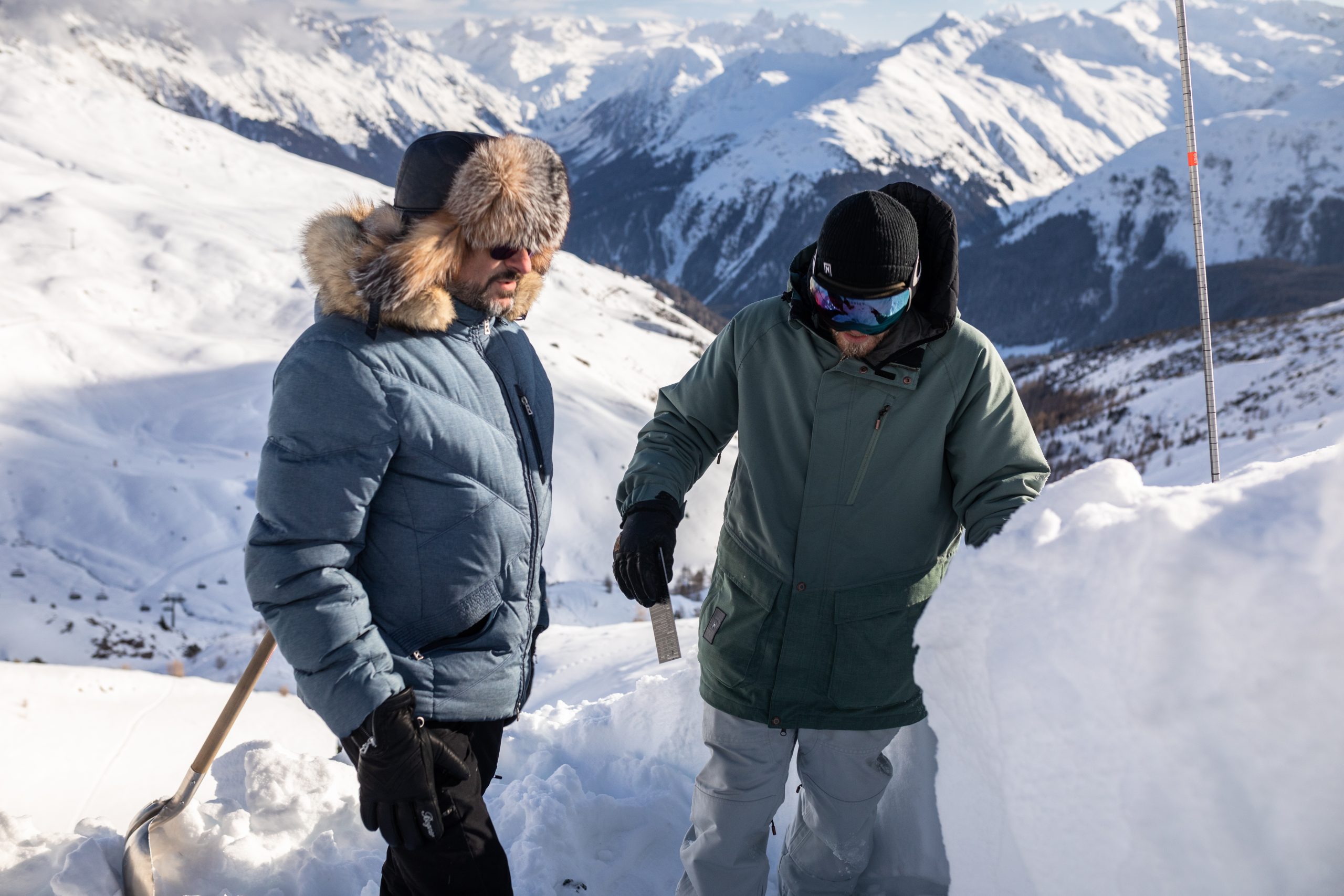 Johan Gaume and Alexander Puzrin making a proof of concept of the Dyatlov case in Davos, Switzerland. © Jamani Caillet/EPFL

Both scientists are nevertheless cautious about their findings, and make it clear that much about the incident remains a mystery. “The truth, of course, is that no one really knows what happened that night. But we do provide strong quantitative evidence that the avalanche theory is plausible,” Puzrin continues.

The two models developed for this study – an analytical one for estimating the time required to trigger an avalanche, created by ETH Zurich, and SLAB’s numerical one for estimating the effect of avalanches on the human body – will be used to better understand natural avalanches and the associated risks. Gaume and Puzrin’s work stands as a tribute to Dyatlov’s team, who were confronted with a “compelling force” of nature. And, although they were unable to complete their treacherous expedition, they have given generations of scientists a perplexing enigma to solve.

Johan Gaume and Alexander Puzrin making a proof of concept of the Dyatlov case in Davos, Switzerland. © Jamani Caillet/EPFL
Scroll Up